Originally published at Gibberings. You can comment here or there. 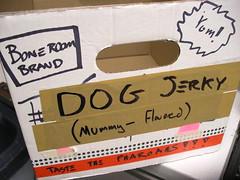 Worked at the Bone Room now for months.  When I started, I was hired on as the technowunderkind, the messiah of network and notebook, the only one who knew why "Google Image Search is broken" (Do Not Display Images for this Page).

Install a shopping cart for our website, said Ron.  Ron is the boss.  He would be "cantankerous" if he wasn't so whiny and easily wounded, more a petulant toddler than a man of any weight or distinction.  I was happy to tackle the shopping cart, after fixing issues of calendar integration (Plaxo), wireless passwords, and the rest.

I began by researching the best cart (ZenCart seemed fine), then moved on to actual implementation.  I had just started to fight with EarthLink about php support when I was taken off the job and heaped with a pile of other, nonsensical tasks: "update" the Bone Room's law file by researching obscure laws regarding endangered species and inheritance, laws that Ron only vaguely remembered having heard about, many years ago.  A towering assignment even for a legal secretary, I was left completely in the dark.  I was instructed specifically not to call Fish and Game directly, even though they'd be able to answer me instantly.  Ron fears the attention of the feds.  After a couple weeks of hunting through badly-organized government websites, making printouts, and highlighting things, I hadn't come up with anything.  I called my mother and asked for referrals to local lawyers that specialized in anything related to my task, but she couldn't help.  Eventually I gave up, having wasted weeks.

Lately, I come into the shop, sweep the floors, unpack fresh crickets from their shipping boxes (Tuesdays), and proceed to swoon around uselessly for eight hours.  Occasionally I will answer a phone or write out a receipt, but these task are more than covered by the other girls.  We're scheduled three or four at a time, getting in each other's way, sneaking work between idleness.
Collapse